[otw_shortcode_dropcap label=”W” size=”large” border=”border” border_color_class=”otw-silver-border”][/otw_shortcode_dropcap]What is the price of fame nowadays especially for a model or actor? A model’sor actors’ investment in themselves is a costly thing. Working to create looks in their book to attract bookings has been a task all models have to persue. Some less than others based on looks or opportunity.testing for want of a better word is not something I have done for quite some time. Dragging yourself to a model agecny to see if youre on par with their brand image for their models, if so you may be allowed to ask to test and then it’s down to the model if they want to. I have to admit that when I was testing it was not normally too much of problem. Nowadays the young guns running the agencies by default will say send us your book  or your links!! To which I will shrug my shoulders and slowly put down the phone as a polite gesture without verbalising how I feel.

So in short I don’t test much if at all unless i feel that there is something in it for me, either financially or creatively. The other poular term is shooting for submission! this simply means testing and hoping to get it featured in an online magazine of which there are thousands now. No real value and

“get yourself a stylist if you can to help out. Virtually impossible”

“For most of the session my shoulder was creating agony for me after having it severely dislocated even with Paracetamol, jst didn’t kill the pain. Phil my assistant was standing close to me from behind making sure I didn’t walk backwards into anything or trip and to take my camera from me.”

[otw_shortcode_dropcap label=”S” size=”large” border=”border” border_color_class=”otw-silver-border”][/otw_shortcode_dropcap]So in a complete contradiction to what I have just said, these pictures are all from one test with a young London model who was very much invested in his own destiny. He styled himself and offered a fair financial deal to secure my time and work with him for the day. What swayed my decisiionn was so f course firstly the cash and second the types of looks he was looking to work with. It also coincided with an opportunity to try out some new kit.

I worked all day with him and his looks with just myself and my assistant, the funny ting was just a few days previous. I have the misfortune of having a very bad shoulder dislocation and was in extreme pain at the time. I would not let him down as the guy had gone to such extensive lengths to work with me and book out clothes and time to be with me and vice versa.

His selection of clothing was intersting and allowed for a selection of great images for him and for me I managed three or four which worked. I used very simple one light set up. A beauty dish with a sock and grid on allowed me to power up with soft light but with power and with a simple flick of the ISO dial I could increase or decreas contast with in the same light and shots. Taking the light very high allowed the light to gently wrap itself around the subject. It was mostly the same light and height with the only deviation was the model getting close to the back ground.

“One shot in particular stood out for me, this was the one with a ruffle around the models neck which attracted. It had a very pre-raphaelite look and brought to mind paintings featuring the Assisi painting style. I later created a composite image to feature in my portrait section.” 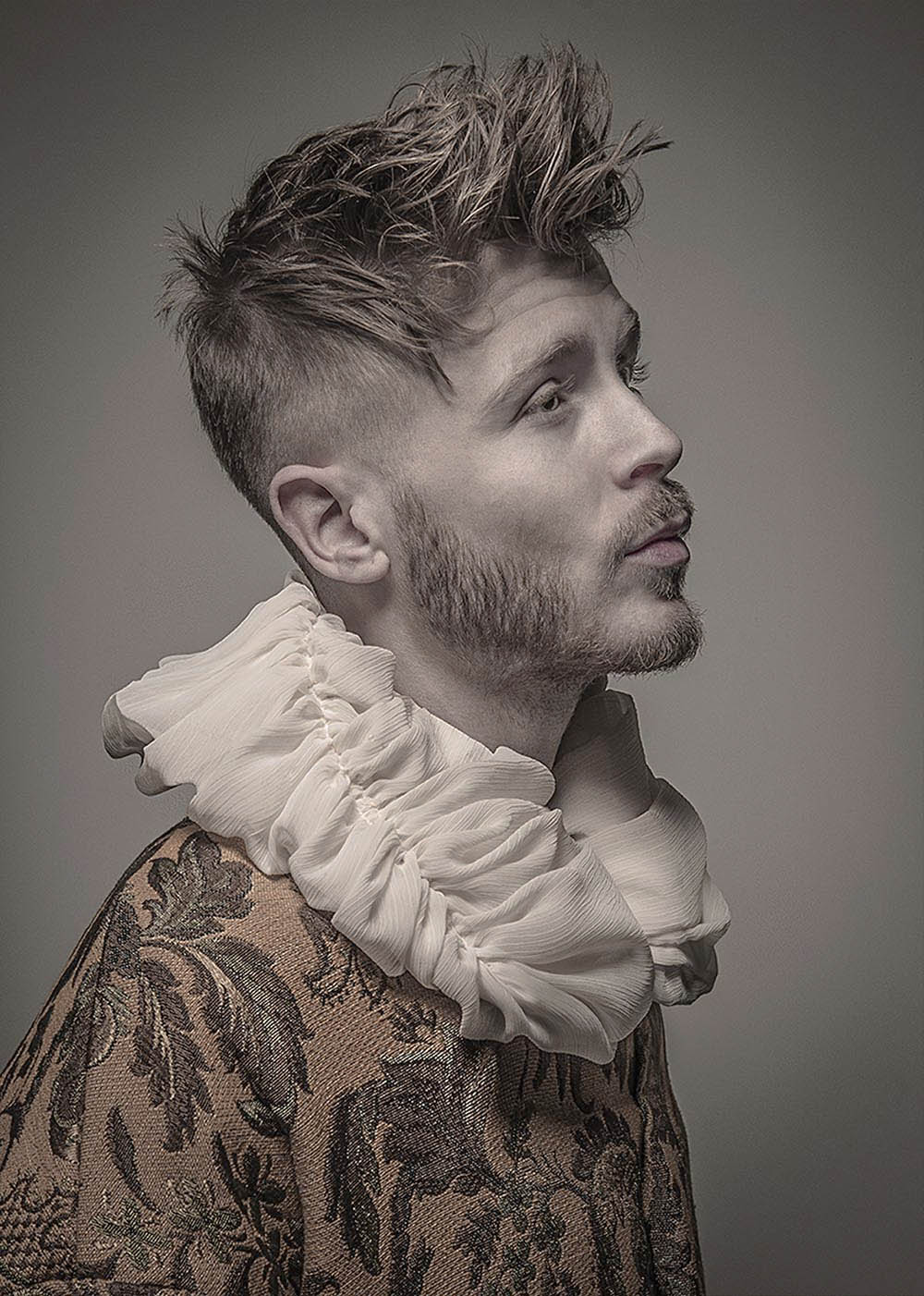 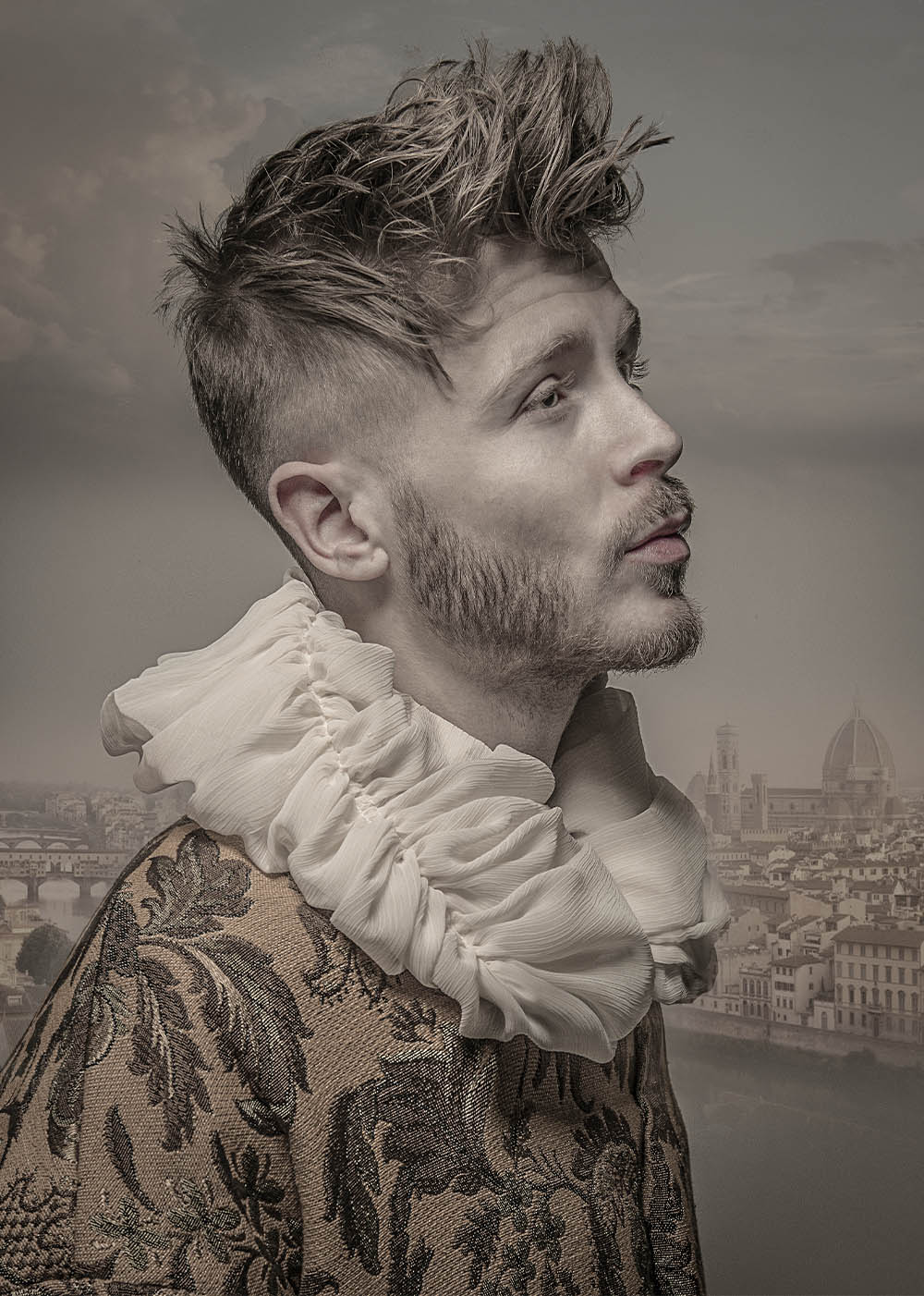